Back to the top

As a new homeowner – a leaseholder of a new-build flat – I have been monitoring the #buildingsafetycrisis and reading other people’s stories with horror. Although it is cladding making most of the headlines, I wanted to also share my experience(s) of the various ways that developers’ negligence is affecting homebuyers like me.

I am prompted to write this after learning this week that, not for the first time, the slack actions of this property’s developer (Linden Homes/Galliford Try/Vistry) have quite literally put my life at risk.

This has been, and likely will be, the most expensive purchase of my life, and something that should be exciting. Over the last three years I have however slowly uncovered that barely anything in this flat was installed safely.

None of what I’m about to describe could be considered ‘snagging’. That’s the list of defects that you give your developer shortly after moving in and, in theory, it should be minor amends; finishing touches, small repairs. My snagging list was comically long and included having to replace literally every window and external door because they weren’t fitted properly; the ventilator didn’t work which consequently caused huge condensation issues (leading to mould) – but that’s another story, and in many ways besides the point…

I’ll start mildly – I don’t have heating in my flat and never have. Yes – that’s my ‘mild’ starting point. My underfloor heating (which was one of many selling points of the flat) hasn’t worked from day one, and despite some feeble efforts on the developer’s part to bring in plumbers and electricians to investigate (their own contracted plumbers and electricians, that is), their conclusion is that if I want it to work, they would have to rip up all my flooring and essentially start the construction and piping again. With the associated price, timescale and disruption in mind, including the fact I would have to temporarily move out, that doesn’t feel feasible. So, that conversation appears to be closed and I’ll make do with wearing extra layers in the winter. I’m lucky that new-builds tend to retain their heat.

Now for the fun stuff: my boiler. On its first annual inspection last year, a plumber shut it off and deemed it dangerous. The boiler flue, which carries out all the gases from your property, had been installed within a wall – and that’s problem number one; that is illegal. It is meant to be visible and accessible so that a gas engineer can ensure it is safe each year. As mine was concealed within a wall, the boiler was shut off (it’s really not fun going without hot water for any given amount of time). Problem number two then arose when, after drilling massive holes in my walls to access said flue, it was found to be completely disconnected within the wall, potentially leaking poisonous gases into not only my flat, but everyone else around me via the wall cavity too (there are 15 flats in this block). Again, it had been like that since day one, signed off by someone, and only uncovered by an independent gasman.

After reporting this, the developer covered the cost of the boiler service (but not the associated time off work I had to take while people ripped my kitchen wall apart); but I didn’t get so much as an apology. To cap things off, they made a total hash of remediating the damage done to my walls, and I later learned that this issue would’ve voided any claim on my home insurance I’d been paying since moving in. As yet another fun aside – they needed to erect scaffolding outside our block to access the external wall, but failed to notify residents and therefore operated the crane above parked cars and passersby. That is also illegal.

As of yesterday, things got REALLY real. My lights were flickering and I lost power in my kitchen. I sensed-checked that the coffee machine I just used hadn’t blown a fuse – it hadn’t – and as the problem wasn’t immediately obvious or Googleable, and more time passed, I phoned an emergency electrician (whilst watching a fridge and freezer full of food spoil). When he arrived, he took apart my fuse box and his first words were “f*cking hell” (he was very professional, I might add – but those aren’t words you want to hear from an electrician). His next words were that I was “days away from a fire”. This is why: 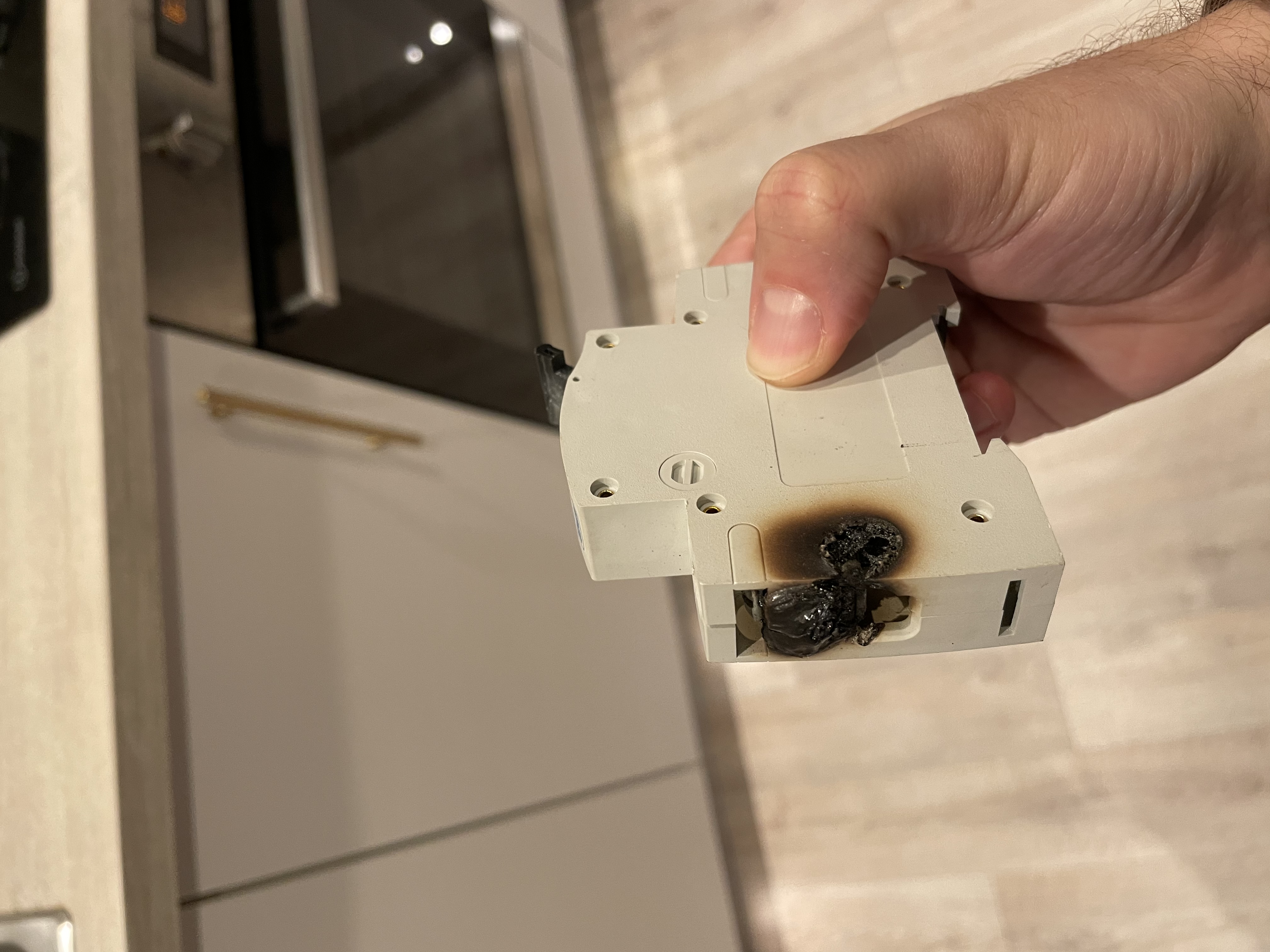 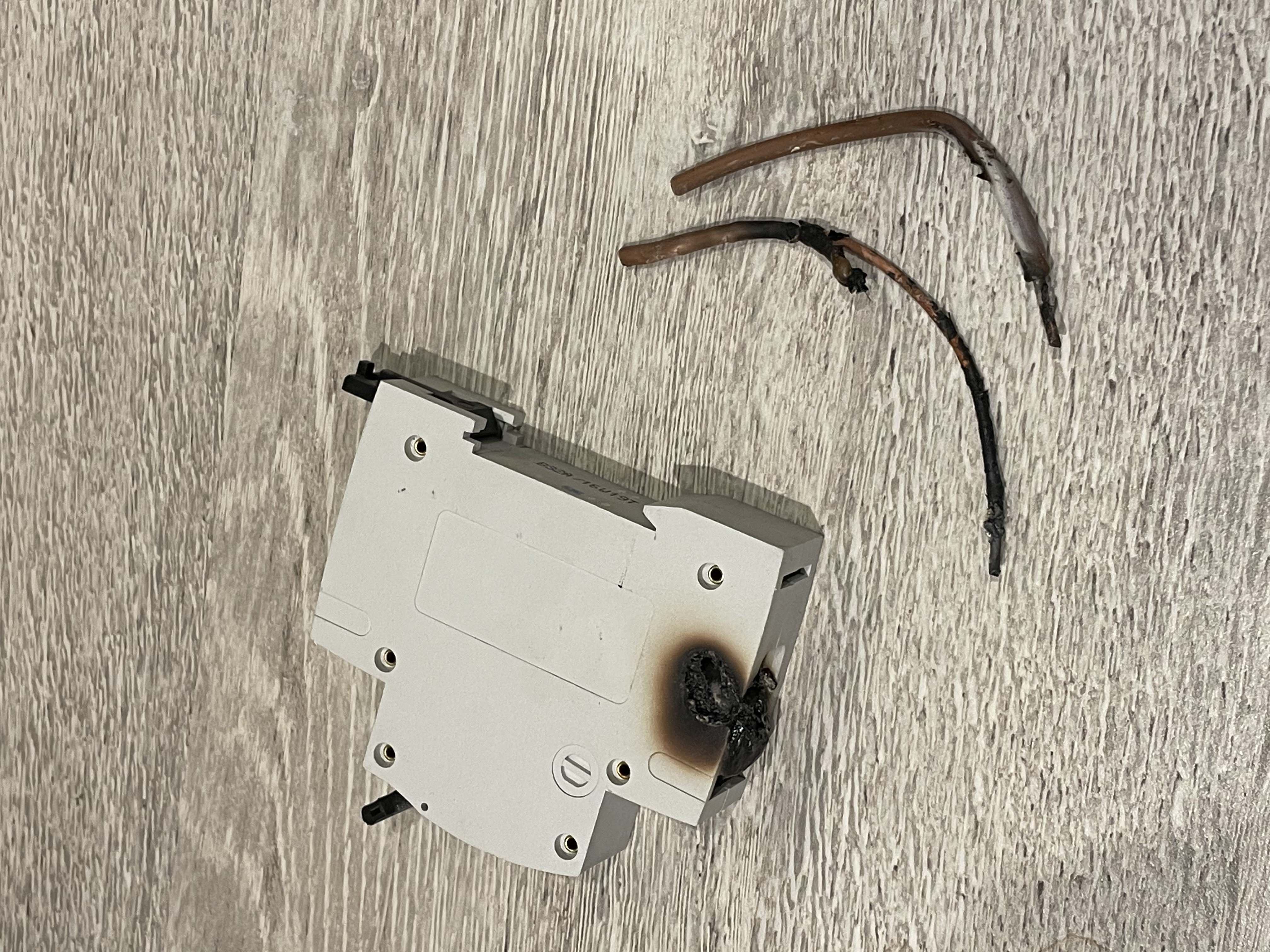 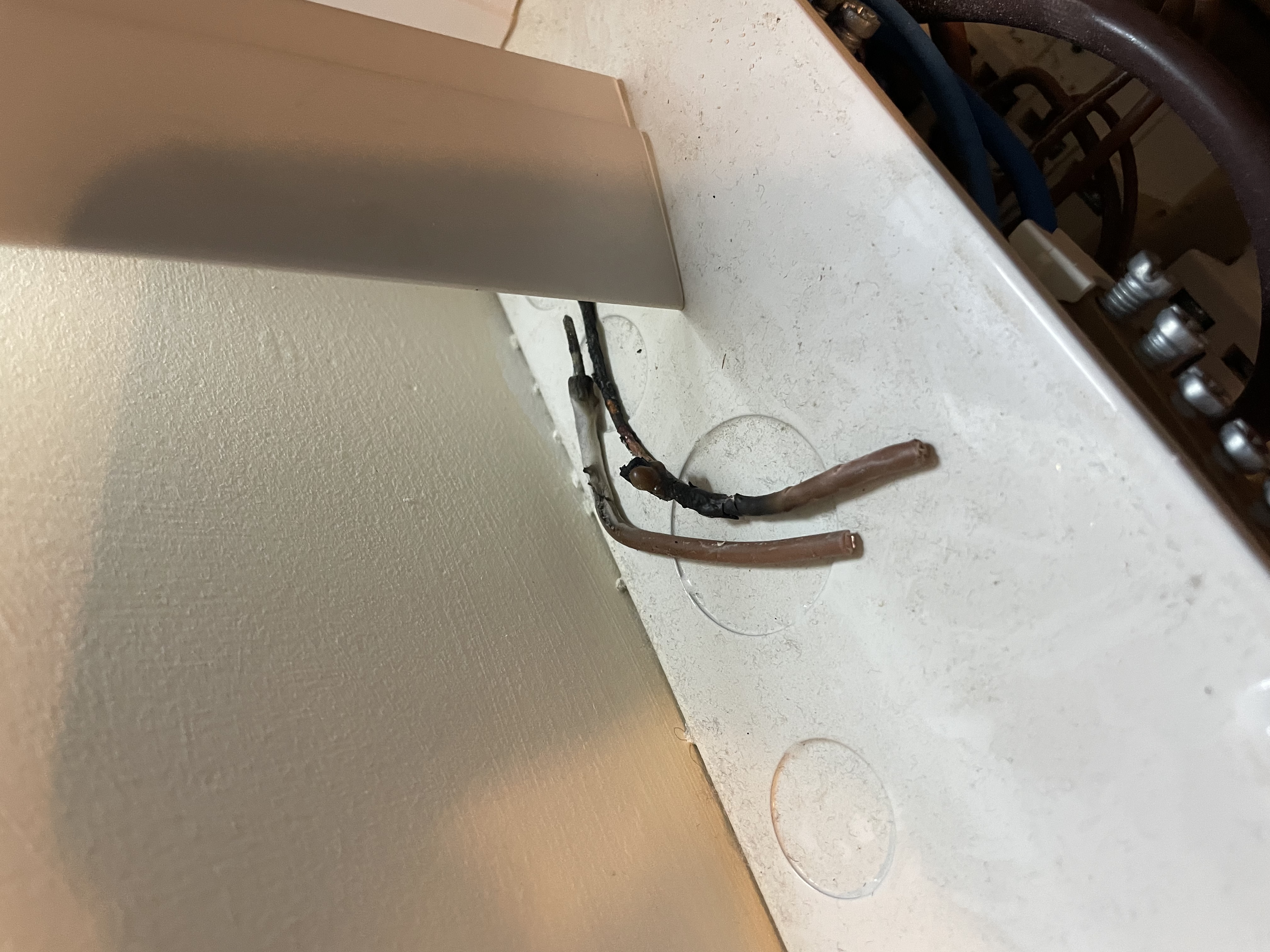 Despite there being a 10 year warranty on my electrical installation, therein lies the problem; it was barely ‘installed’ in the first place – and those photos show the consequences. None of the connections within my fuse box had been tightened at all, and the loose socket circuit – powering all my kitchen appliances – had therefore been burnt to what looks like a Twiglet. That explained the loss of power that morning, but it became apparent that all the other wires were also heading the same way, including the main circuit, which was again loose to the touch and torched.

I’ll repeat this: my FUSE BOX was installed with such little care, and then SIGNED OFF, that three years into living here I was apparently days away from a fire. I am very, very lucky to have a) been at home (it’s my week off – what a relaxing way to spend it), and b) been proactive enough to immediately arrange a call-out at the first sign of a problem. Otherwise my dog and I could have been toast. I can’t tell you how upset that thought makes me.

There have been countless other incidents. Others in this block have experienced the same or similar issues.

You can receive all the niceties, chit-chat and assurances in the world when you’re in the process of buying your property, but the sad and cold truth is that, particularly post-sale, none of these people care about you, or apparently your safety.

Why was any of this signed off?

Why is it only months/years down the line that independent tradespeople expose just how shoddily the most important and fundamental components of my flat were assembled?

What I’ve described above doesn’t begin to cover the extent of the problems I’ve experienced in buying this place but I’m beyond tired of listing and moaning about it all – and don’t get me started on the management company, First Port, who are reluctant (at best) to investigate any communal issues, but will take money off you for breathing. (An example of an ongoing issue with them is that they are taking hundreds of pounds per year from all 15 homeowners in this block for ‘communal electricity’ – despite this block being solar powered. It transpires that those solar panels ‘don’t work’ and never have, because they weren’t installed properly. I’m beginning to wonder what actually was installed correctly).

I have so many questions and I’m furious at the negligence from all parties: Linden Homes, Galliford Try, Vistry, First Port – whatever any of the above decide to call themselves this week (the names and contact details of these companies constantly change either through the dissolving of business or a merger/buy-out – feels convenient doesn’t it?)

All said, my biggest question and fear is: What next? What else is yet to be uncovered in my home; under the floors, within the walls, inside sealed boxes and panels? And what am I meant to do about it? I’m totally over the lengthy email chains where I’m polite and patient. I’m beyond asking nicely to feel safe in my own home. Everything I’ve described here makes me feel pretty litigious but I’m realistic enough to know that taking on multi-million pound companies (Vistry’s total revenue in 2020 was over £2billion – good for them) would be an expensive, exhausting and likely ultimately fruitless task. In fact, this blog feels pretty futile and nothing more than a cathartic rant – though if it means that one person checks their own boiler, fuse box or any other safety feature in their home then it would have served a purpose.

Unfortunately right now there is no answer and any homebuyer will have to deal with developers and management companies – but I would implore anyone to go in with their eyes open and notepad out. Keep a record of everything and do not for one minute feel like a nag for asking for these safety features to be double-checked. I also absolutely join the call for the government to order the developers to bear the brunt of these remedial costs – not the leaseholders. My costs have been significant, but at times reimbursed, and clearly nothing compared to those experiencing the enforced installation of internal sprinklers or replacement of timber balconies in their apartment blocks.

I want to like this flat. I’ve decorated it nicely, I’ve made the best of it. I’ve made it my home as much as I can despite a really challenging couple of years on a personal level and lockdowns where our homes have become such bigger parts of our lives. But these things keep coming out of the woodworks, with an ever-increasing impact on my wallet, time, energy, and now – particularly with my boiler and electrics in mind – with a pretty significant toll on my mental health. I can only imagine how those facing cladding-related remedial issues and bills are feeling, and I sympathise hugely.

Speaking of which – I’ve received notice that an EWS1 form is not needed for this block, which comes as a relief, even if those requirements are at the mercy of a U-turn from a government famous for U-turns. And based on the total lack of integrity and attention to detail I’ve experienced so far from all parties, it is not unfeasible that it will be the next problem.